ReSpek Nature: Saving the World One Spekboom at a Time

As we transition into an age of universal environmental awareness, a new marriage between technology and nature is needed to meet the unprecedented challenges ahead. ReSpek Nature is an organization making headway in the field, breaking ground in carbon sequestering and ecosystem restoration in the Karoo. Their approach to mitigating our collective carbon footprint is a glimpse into the future of managing carbon emissions.

We sat down with Guy Lieberman, founder and trustee of the Giant Flag, and Ephraim Moss, the Joint CEO and CTO of ReSpek Nature, to discuss how they came together to create ReSpek Nature, and just what innovative thinking mixed with the right tech can do to impact carbon emissions.

"There are just so many layers to it: environmental, scientific, and socio-economic. This is a project powered by relationships, of people coming together." - Guy Lieberman, founder of Giant Flag

What was the inspiration that led you to create ReSpek Nature?

After the 2010 Soccer World Cup, we wanted to create a legacy project inspired by all that South Africa had achieved. In partnership with Nahana Communications Group, we came up with the idea of the Giant Flag — a 66 hectare South African flag in the Karoo made up of millions of coloured desert succulents, an eight megawatt solar field, and growing tunnels.

It wasn’t as simple as going out into the Karoo and just starting to plant. It took four years to prepare the ground, get environmental impact authorization, and establish the Trust that would manage the project. We knew we were onto something big when, after the project was launched, we were featured as one of CNN’s 10 Ideas To Change The World; and plenty more accolades have followed since.

Funding was a challenge. Let’s just say we were promised a lot and got let down a lot, but we didn’t let that slow our roll. We turned it into a crowdfunding project that aimed to let contributors feel the impact of their effort. Instead of simply accepting donations, supporters get to adopt plants within the flag and receive a certificate of their contribution with their new baby’s GPS coordinates to show them where their contribution was planted.

We created a back end that connected the contributor to the plant via a site and a payment gateway. But the initial model wasn’t perfect. Plant by plant adoption was a slow process, so we came together to think about the various layers of impact Giant Flag was making.

The spekboom, which is the green and largest section of the flag, is incredibly effective at sequestering carbon. In fact, planting enough spekboom has the potential to massively reduce an individual’s carbon footprint; so why not bring it all together?

Thus ReSpek Nature was born from within the Giant Flag, an accessible way for anyone in the world to reduce their carbon footprint with a simple donation. Users can go to the ReSpek Nature website and make a contribution directly related to the amount of driving they do in a year, giving them the means to offset the carbon they produce every day.

But we wanted to make it even easier for the world to reduce their carbon footprint. By creating an ecommerce plugin, we’re allowing merchants to add a ReSpek contribution offer at their online store checkout. It gives customers the option to add an extra R10 to their purchase to offset the carbon emissions every time they make a purchase online.

The best part about it is that ReSpek Nature isn’t a carbon offset project aggregator where your contribution moves through administrators to the necessary programmes; your donation goes directly to adding spekboom to the Giant Flag, and you even get a certificate to show exactly where your plant is situated 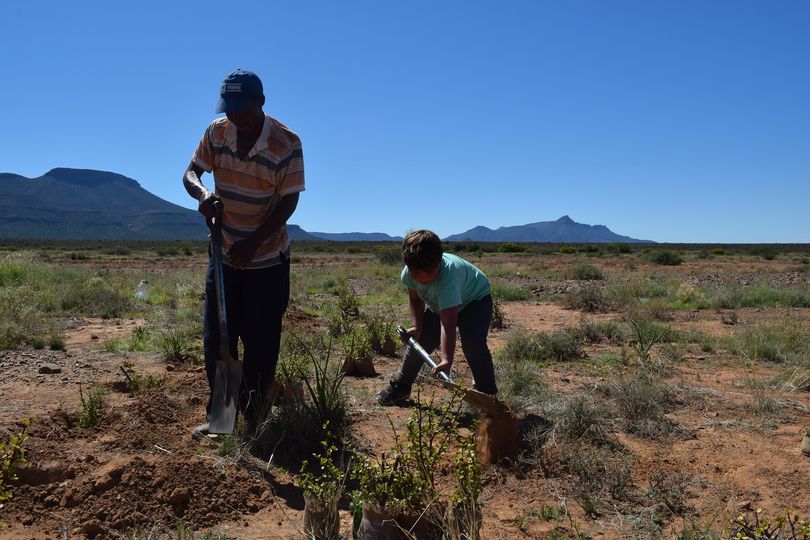 What does the future of ReSpek Nature look like?

When it comes to making a positive environmental impact, there’s no point in working in a vacuum. ReSpek Nature is part of a larger rollout where we collaborate with other nature-based carbon sequestering activists. The UN Environment Programme has assigned an incredible 1.2 million hectares of land for spekboom growth, and we need all hands on deck to take full advantage of this amazing opportunity.

So the Giant Flag is just the start of the project. We’re planning on helping on the ultimate planting of  3 billion spekboom over the next 10 years, across the Karoo thicket biome. We’ll be working with SANParks on restoring the land and making a difference in the surrounding communities by drawing on their help. It’s a huge socio-economic project, all powered by online payment gateways like Peach Payments.

How can businesses contribute to ReSpek Nature?

We’ve developed a Shopify app that allows merchants to easily connect us to their online stores to give their customers the opportunity to adopt a spekboom at checkout. Platforms like Shopify give us the ability to get paid directly, which is great.

The merchant’s brand is shown alongside our own to give the consumer the opportunity to educate themselves about the carbon sequestration process and find out how they can reduce their carbon footprint. We’re also looking into ways to encourage the merchants themselves to make contributions rather than only passing on the responsibility to the consumer.

We’ve also developed an API so that anyone with some tech knowledge can plug into our backend so that they can make a contribution regardless of how they operate. It’s a really simple mechanism that developers can build on top of, giving devs the opportunity to collaborate to develop further plugins on our behalf. 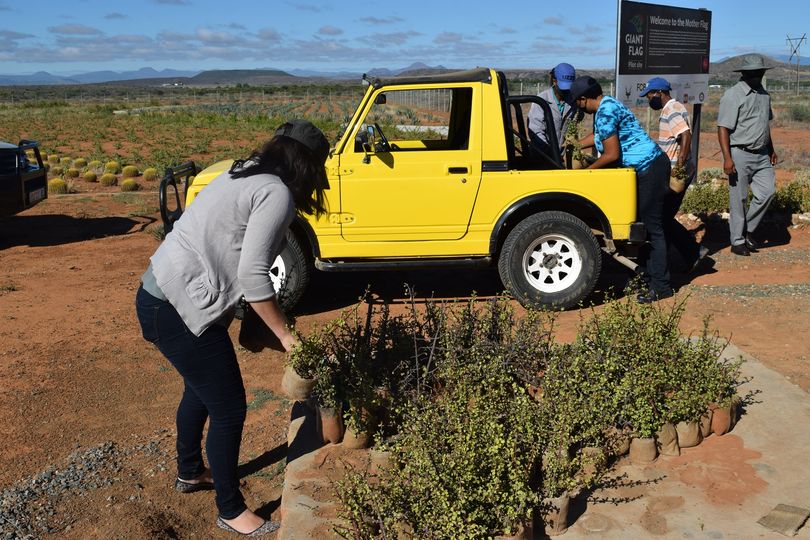 What other technologies are you using to achieve your mission?

There’s more to this process than just planting a spekboom. We need to constantly monitor the plants to ensure that they’re looked after and are actually sequestering the carbon. Some amazing opportunities have popped up that allow us to monitor them remotely.

There are satellites orbiting the globe 24/7 constantly taking photos of the planet’s surface. These photos are available to us and they allow us to monitor how the plants are doing, if there’s enough water in the ground, and even to calculate how much carbon is being sequestered. Getting international bodies to come in and verify carbon projects usually costs tens of thousands of euros, so this approach is revolutionary.

We’re also exploring breaking new ground in the technology sector by considering NFTs for contributors. The idea is that every ten kilograms of carbon that their plants sequester will award them a verifiable carbon reduction NFT that we’re hoping will have real value as carbon tax becomes more prevalent in the future. 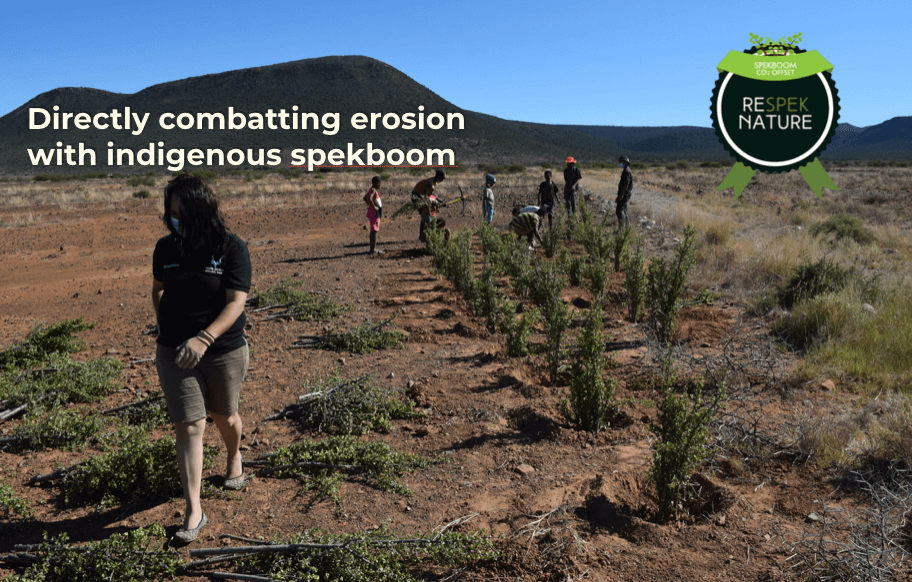 What effect has Giant Flag and ReSpek Nature had on the surrounding landscapes and community?

We’ve got a great relationship with South African National Parks. We’re neighbours with the Cambedoo National Park, and the site itself is municipal commonage. It had previously been overgrazed and undermanaged so the Giant Flag and ReSpek Nature will have a substantial impact on restoring the land. SANParks was relieved because when you cover the ground with plants, you’re actually securing the water table by reducing evaporation and storing moisture in the plants.

Of the 100 hectare site allotted to the Giant Flag, 66 is for the project and 34 are a buffer between the site and the local township of Asherville. We received grant funding from Eastern Cape Province and we used a portion on a creative community upliftment project, adding a new artwork to the township of the Giant Flag to pass on the ethos of what we’re doing. That really galvanized our relationship. This project isn’t just about the flora or even the fauna; it’s also about human dignity.

There’s been a lot of support and excitement from the Department of Tourism and the environmental industry because of all the attention the Giant Flag brings to the area. There are so many layers to it and we’re building relationships across so many sectors. Right now there are botanists and workers carefully harvesting baby spekboom from the old-growth, grandaddy spekboom, which are 100 year-plus-old plants. We’re in close contact with our team on the ground. This whole project is run by relationships and it’s been inspiring seeing everyone come together to make it happen.

Thinking of starting a Wix store? Let’s get you paid.

Wix is a great platform to use when you’re starting an ecommerce business. The setup and monthly...
Read More

Need to choose a delivery partner and don’t know where to start? We’ve got you covered....
Read More

Intro To Couriers, Costs, and Ecommerce

Starting your ecommerce business means preparing for scale from the get go. That can look like...
Read More

What makes a payment gateway great?

We all want our online businesses to reach as many people as possible, but have you considered all...
Read More
Ecommerce Plugins